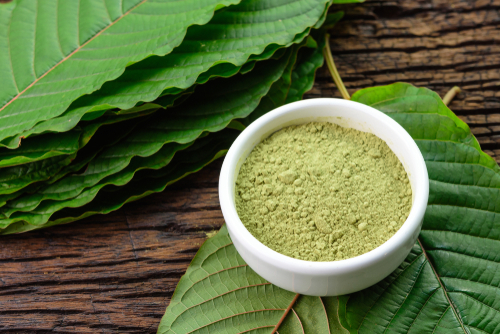 According to the National Institute on Drug Abuse, kratom is an herbal extract that comes from the leaves of an evergreen tree (Mitragyna speciosa) grown in Southeast Asia.

The leaves contain a compound that when ingested can elicit mind-altering (psychotropic) effects. There are different ways individuals can ingest kratom, such as: swallowing it as a pill, capsule, or extract, chewing kratom leaves, drinking it as brewed tea, smoking it, and/ or eating it in food. While the exact chemical and physiological properties of kratom are unknown, it is recognized as a psychoactive substance because it changes the brain’s natural chemistry.

Certain evidence suggests that kratom should be classified as an opioid. In a detailed analysis of kratom by the FDA, scientists discovered that 22 of the 25 compounds within kratom bind to the mu-opioid receptors (MORs), stimulating the same brain receptors as other opiates such as morphine. Kratom works by attaching to opioid receptors in the brain, spinal cord, gastrointestinal tract, and other organs in one’s body and adjusts the amount of information surrounding pain that is relayed to various areas of one’s body, thereby reducing one’s perception of pain. When ingested in small doses the effects of kratom can result in increased energy levels. When kratom is abused in larger doses it can have similar effects to those of opioid drugs, such as euphoria and/ or sedation. Although the United States Drug Enforcement Administration (DEA) has not classified kratom as a controlled substance, the U.S. Food and Drug Administration (FDA) warns its consumers against the use of kratom.

Vivitrol is the brand name, an injectable extended-release form of the medication that is generically known as naltrexone. It is a prescription medicine that was originally approved by the United States Food and Drug Administration in 2006 to be used for the treatment of alcohol dependence. Later, in 2010, the FDA also approved Vivitrol for use of treating opioid addiction. Vivitrol is an extended-release opioid receptor antagonist. Vivitrol works by stopping endorphins from binding to opioid receptors in one’s brain, which thereby ends the desirable feelings associated with being intoxicated. Vivitrol is a pure opioid antagonist, and as such it does not allow other drugs to bind to opioid receptor cells in one’s brain. Hence, this medication can be effective in treating opioid addiction as it directly blocks opioid drugs from binding to opioid receptors in one’s brain, essentially rendering the opioid medication useless in one’s body.

In theory, Vivitrol could block kratom because it acts similarly to opioids in one’s system, however, to begin Vivitrol treatment, an individual must be completely free and clean of all alcohol and opioids, including kratom, for at least seven days (in some cases a minimum of fourteen days is required). Research indicates that antagonist drugs, such as Vivitrol, can cause a severe adverse interaction when kratom is still in the system.