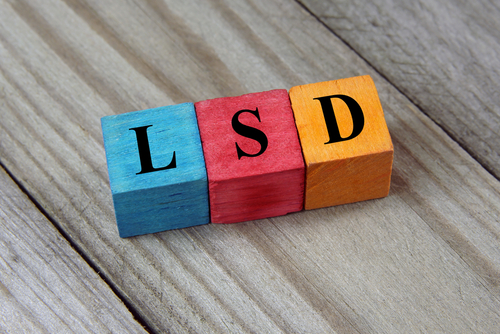 Post-traumatic stress disorder (PTSD) as defined by the Mayo Clinic “is a mental health condition that’s triggered by a terrifying event—either experiencing it or witnessing it.” PTSD is listed under the new category called Trauma- and Stressor-Related Disorders in the Diagnostic and Statistical Manual of Mental Disorders, Fifth Edition (DSM-5).

PTSD can occur when an individual has experienced severe stress or anxiety after being exposed to a traumatic event. There are many treatment options for an individual struggling with PTSD. An individual with PTSD will likely require a customized treatment plan that may include a variety of treatment modalities, and there is data that suggests that certain psychedelics, such as LSD, may be helpful in treating PTSD.

Lysergic acid diethylamide (LSD), also known colloquially as acid, is a psychedelic (or mind-altering) drug. LSD is a synthetic (man-made) chemical that is manufactured from the ergot fungus that commonly infects rye and other grains. LSD is described as an empathogen because of how it changes perception, mood, and thought, enhancing feelings of empathy and connectedness. Scientists, in the mid-twentieth century, began investigating the possible benefits of psychedelic drugs, such as LSD. In the Controlled Substances Act of 1970, LSD was classified by the United States Drug Enforcement Administration (DEA) as a Schedule I substance, which is defined as “drugs with no currently accepted medical use and a high potential for abuse.” Although this classification greatly interfered with research, a few dedicated scientists continued to study and later test, therapeutic treatments that involved LSD.

Neuropsychopharmacology, an international scientific journal, published an article in 2016 called LSD Acutely Impairs Fear Recognition and Enhances Emotional Empathy and Sociality. The findings from the study conducted in this article concluded that “LSD produced feelings of happiness, trust, closeness to others, enhanced explicit and implicit emotional empathy…, and impaired the recognition of sad and fearful emotions…LSD enhanced the participants’ desire to be with other people and increased their prosocial behavior…These effects of LSD on emotion processing and sociality may be useful for LSD-assisted psychotherapy.” It is important to note that LSD remains an illicit substance and although some experts believe that it should be treated like any other pharmaceutical capable of interacting with one’s brain and body chemistry for therapeutic effect, it has yet to be approved by the U.S. Food and Drug Administration.